The new Hosting combination of Paul McDermott & Margaret Carroll greeted a good crowd, keeping them in good spirits and delivering a really good night of music and mirth started off by PAUL warning HE'LL HAVE TO GO while for BANJO JOHN everything is alright WHEN YOU'RE SMILING and KATH & STAN were well lively with SHAKE SHUGAREE. Next for PETE ROBERTS she’s got everything she needs she’s an artist she don’t look back, SHE BELONGS TO ME and for JAN & MARK it was a question of don’t she make my BROWN EYES BLUE before LONG JOHN decided to sing about BIG JIM. With a blast of Ewan McColl HELEN sang about the ELFIN KNIGHT whereas ALLEN was with SALLY FREE AND EASY leaving ANN to tell the story of HARPER VALLEY PTA. On another plane ANDY asked Gordon Lightfoot IF YOU COULD READ MY MIND which we needed to do with TWIDDLE by PETE MINERS but we didn’t believe it when ED sang that he was ALL USED UP. With a question PAUL McD asked HAVE YOU SEEN THE RAIN but it was all the same to BANJO JOHN who was that LITTLE OL' WINE DRINKER ME and it didn’t matter to KATH & STAN who said WE COULD FLY. It was enough for PETE ROBERTS to last a WHOLE LIFE THROUGH and a bit the same for MARK who was LAZING ON A SUNNY AFTERNOON and LONG JOHN who was up KILGARY MOUNTAIN. As we headed to the break HELEN sang I HOPE YOU DANCE which for reason sent ALLEN all WILD EYED.
In the Raffle Kath won the Bottle of Wine, Chris won the Toilet Bag and Long John won the Box of Chocolates before ED went subterranean when he sang I'LL SING OF THE FLUSHERS. This time JAN was alone with MY LAGAN LOVE and ANDY was THE ONE WHO GOT AWAY before DOUGLAS finally rose to his feet with RANTERS WHARF followed by ANN who was after THE PUNCH AND JUDY MAN. With a bit of a fib PETE MINERS next told us he had TOTAL RECALL (own composition) and KATH & STAN went all of 10,000 MILES before PETE ROBERTS claimed MY LADY'S A WILD FLYING DOVE. A bit early yet but MARK & JAN were longing for the DIMMING OF THE DAY whereas LONG JOHN was looking for the BELLE OF BELFAST CITY leaving HELEN to retort HEY! THAT'S NO WAY TO SAY GOODBYE. Next DOUGLAS came back as CAPTAIN KIDD as ALLEN contemplated PICTURES IN A MAGAZINE and ANDY wanted us to TALK TO ME OF MENDOCINO. After a splendid evening PETE MINERS played his own PLUCK FLOYDD and DOUGLAS guaranteed a big finish as we all sang LOWLANDS AWAY leaving ED to close the evening with THE BOX. Top class from Paul & Margaret.

A select but jovial turnout first heard PETE take us ALL ALONG THE WATCHTOWER where PAUL RILEY was adamant YOU CAN’T BUY ME LOVE before JOHN pitied the POOR FOOL written by Simon Eales, a good song. Somehow it made ED remember some CHILDHOOD MEMORIES whereas PAUL McD takes EVERY DAY, Buddy Holly, as it comes and KAMRAN commented SO RELAX. This left HEATHER Kenyon to remember some AMUSING GRAVE ENGRAVINGS before PETE sang Alexander’s MORNING LIGHT and JOHN had us all singing with ME AND BOBBIE McGEE. Then the first PAUL Riley was back on his Beatles kick with NOWHERE MAN and PAUL McD pleaded TAKE ME AS I AM which left ED to tell us about ALBERT. Coming up to the interval HEATHER Kenyon told us some DAFT THINGS KIDS SAY and KAMRAN was IN THE JAILHOUSE NOW before PETE told another BUNCH OF FLUTTERBYS.
The Bumper Raffle saw the Picture frame won by Pete, the Bottle of Red Wine won by Linda, the Box of Chocolates won by Margaret, the Novel won by Kevin and the Barbecue Scheduler won by Ed before PETE started the second half with a HEART OF GOLD. Then up jumped PAUL McD to tell us I USE TA LOVE HER (Saw Doctors) followed by PAUL Riley who had the BOLLINDER BOATMAN BLUES and JOHN who topped the lot as SUPERMAN. The first PETE then told us some MORE FLUTTERBYS followed by PETE Roberts with SUNSETS and HEATHER Kenyon with a POEM and KAMRAN who swore I’M NEVER GONNA GIVE YOU UP. Setting us up for a big finish ED asked WILL THE TURTLE (Circle) BE UNBROKEN by Les Barker which made PAUL McD feel absolutely WONDERFUL TONIGHT and JOHN head for COUNTRY ROADS. Finally PAUL nailed his BEATLES’ MEDLEY which gave PETE even MORE FLUTTERBYS before KAMRAN sent us all home to bed with rockabye SWEET BABY JAMES, Top stuff!

Newsletter No 537 13 August 2019
Like the professionals they are KATH & STAN were completely un-phased as the multitude rolled into Sale Folk Club this week and began a great night with their version of MONDAY MORNING. No wonder CHRIS came out with I WASN’T EXPECTING THAT before IAN WHITE found himself on the STREETS OF LONDON where for PHIL it was all RUSSIANS AND AMERICANS (Al Stewart). Next newcomer JOHN LONG covered Kristofferson’s LOVING HER WAS EASIER THAN ANYTHING I’LL EVER DO AGAIN to which HILARY retorted with a blast of her ONE-LINERS and SIMON recalled one from DILLARD CHANDLER. Still in the bin marked class A IAN played HOME IS WHERE THE HEART IS, a Clive Gregson tune, whereas for ALLEN it was a case of WAR DRAGS ON with HELEN advising PACK UP YOUR SORROWS. Traditionally PETER was then off to YARMOUTH TOWN before PAUL McD introduced LUKA and CHRIS returned with HERE COMES THE SUN. Then temporarily off the gig circuit BEN sang about his SISTER just as KATH & PETE were GONE TO AMERICA and ANDY encountered the OLD 55. In all this movement ED celebrated THE PILGRIM and KATH & STAN sniffed out a crescendo toward the break with two tunes THREE AROUND THREE & COME TO THE CEILIDH which IAN WHITE followed with SETH DAVY and ALLEN nearly went poetic with his NEARLY SONNET 18.
In the bumper interval raffle Hilary and Pete won Bottles of Wine, Kate won a Box of Chocolates and Pete won a Box of Biscuits before PAUL McD got us rolling again with BABY CAN I HOLD YOU and newcomers ROY& KIM gave us traditionally REUNION HILL. Classically PHIL then gave us BALLETTO before JOHN LONG told us his AIM IN LIFE with his own song which left SIMON to go back to LOUISIANA 1927 and IAN to do a Theresa May with a run in some FIELDS OF GOLD. No wonder HELEN suddenly became OUTWARD BOUND and PETER go the DYIN’ CRAPSHOOTER’S BLUES and BEN turned to one of his best songs TWEEDLEDEE. Then definitely began the big finish with KATH & PETE giving us BROTHERS IN ARMS and a GOSPEL MEDLEY followed by ANDY who was in SWEET CAROLINA and ED was in terrible trouble ON MY WAY TO WORK. This left ROY & KIM to send us home happy with the BROKEN DOWN SQUATTER and singing our heads off with FAREWELL TO THE GOLD. Top class from start to finish; wow!!

A highly select gathering and BANJO JOHN started the evening and we remembered to give him the envelope Mark & Jan left in the box for him before he showed his loyalty to Man City by singing their favourite BLUE MOON by Rodgers & Hart (1934). KATH & STAN then followed with THE MAN IN THE MOON before ALLEN, who had brought his lovely wife JEN to boost the numbers, and he sang the 1960's workers’ song, POUND A WEEK RISE. Since PAUL had forgotten his song book he was unable to sing the Beatles’ numbers promised last week so he struck up with GOOD MORNING BLUES instead and luckily PETER was back in full swing this week and treated us to Dylan’s BOOTS OF SPANISH LEATHER before HILARY told us some more of her usual hysterical ONE-LINERS. Finally we encouraged Helen to spend hours tuning her guitar to pad out the time before singing Zoë Mulford's ALL OF HIS SONGS WERE LOVE SONGS which left ED to complete the round with SILVER TONGUED DEVIL before BANJO JOHN returned sing SOMEBODY STOLE MY GAL, which nobody believed and KATH & STAN were WATERBOUND. By this time TONY had arrived so he unsheathed his guitar and sang IT’S JUST ANOTHER DAY, which is never true in Sale Folk Club, before HELEN was quickly up again to sing MAKE ME AN ANGEL THAT FLIES FROM MONTGOMERY. Now we can spell the title, ALLEN sang one of his favourites ERIN GO BRAGH' to which PETER replied TAKE IT EASY and HILARY replied, “You cannot be serious” with some more hilarious ONE-LINERS and had everyone in stitches. This left PAUL to sing CORRINA, CORRINA and ED to recite his monologue, SHURRUP YA BLOODY LIAR and, before leaving, BANJO JOHN to perform again with PAUL on harmonica for James Fuller's SAN FRANCISCO BAY BLUES.

In the Break the interval Raffle saw Kath & Stan win the Bottle of French Red Wine, Heather win a Candle in a lidded jar and Helen win the Cactus Garden before TONY re-started proceedings with a sing along LEAVING ON A JET PLANE and KATH & STAN sang their CENSUS SONG before ALLEN sang his own moving song ROAD TO PASSCHENDAELE. No wonder PETER next sang I DON’T WANT TO TALK ABOUT IT and fortunately HILARY managed to find some more ONE-LINERS from the depths of her notes and ED sang his funny ‘AD ME. On a serious note PAUL decided to sing HANG ME from the Diary of Llewellyn Jones before HELEN cheered us up by singing I’M GOING TO TRY FOR THE SUN which took us to the final stretch. Going for a big finish TONY sang WHEN I’M 64; KATH & STAN sang HEDGES AND DITCHES; PAUL reminded us AS GOD AS I’VE BEEN TO YOU; PETER was LAZING ON A SUNNY AFTERNOON; HEN sang a beautiful NO NAMES (K Rusby); and ALLEN finished the night with IT ALL SEEMS SUCH A LONG TIME AGO to end a top night. More next week! 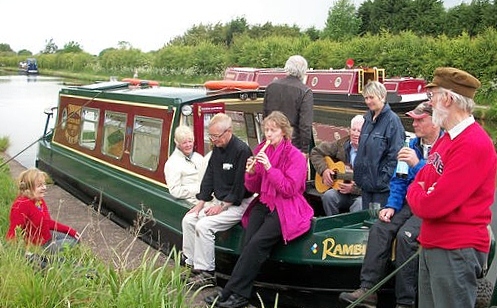