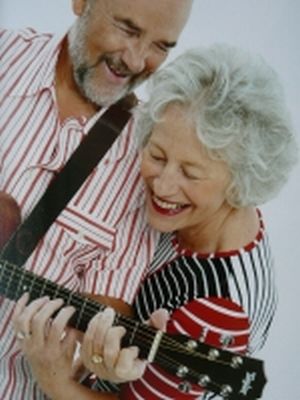 Don & Heather Davies founded Sale Folk Club on the 27th October 2008 when Jim Clarke the Secretary of The United Services Club offered them the use of their excellent facilities and its full support.

Having been instrumental in raising the Railway Folk Club to a position of national prominence they quickly established Tuesday evening as a regular acoustic opportunity for singers, musicians, poets and importantly listeners. A grand season of Special Concerts with internationally famous artists soon followed.

They recorded the first album of their own songs, "The Kythera Dream", about the Greek Island of Kythera and its people in 1997 with Bernard Cromarty who also provided the multi-instrumental support. In fact every year on their return it is still in demand. The second, "Dances for Dollars", and third "Flowers on the Water", albums were recorded by Ken Powell who also kindly made their excellent Smiley Face Guitar. These are currently being sold in aid of the charities supported by the Soroptimists.

Ed & Sue Bentham. Ed is renowned for his collection of extremely humorous songs covering a wide range of subjects from the lady trying to find a replacement for her dead husband, the only qualification being that he must be able to stir his coffee with his thumb!?!, to Margaret's unrepentant nuisance caller who even rings her from the jail after being arrested for the third time and in the USA it is three and out! Sue is the brains of the outfit and is a superb organiser who has been known to occasionally but brilliantly play the Bodhran. She is much more famous, however, for her step dancing. Read about Support Artists and Hosts...........